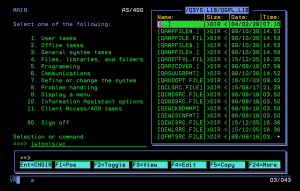 Wachs Commander is a easy-to-use file/object management utility for the IBM i.

Wachs Commander works on the IFS and allows you to work with files/objects in virtually any mounted file system. Advanced file/object selection.

Wachs Commander is a very powerful utility that works on the Integrated File System (IFS). The advantage of this is that Wachs Commander can be used on (theoretically) all file systems that can be mounted on the IBM i.

Wachs Commander allows you to have e.g. an IFS folder in one of the windows and a library in the other window. You can copy and move objects from the library to the IFS and vice versa, provided that the object type is support by OS/400 for this.

This table shows the keys used by the two file/object windows in Wachs Commander and their mapping to Norton Commander®:

This table shows the keys used by the Command Entry window in Wachs Commander and their mapping to Norton Commander®: 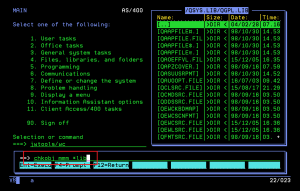 As in Norton Commander®, you can enter commands and run them. When one of the top windows are active, press [F20] (<Shift>[F8]) as you would in SEU, in order to go to the Command Entry Window.

When you press [ENTER] the command is run. When the command runs without errors, the Command Entry window will be cleared. If an error occurs, the error message (escape message) is displayed in a window. Translated to English: CPF9801: The object MMM in library *LIBL does not exist.

If you try to start Wachs Commander from the Command Entry window, you will also see an error message, as this is not allowed.

A very nice feature of Wachs Commander, which also existed in Norton Commander®, is the Find File window. It allows you to search the tree structure in the IFS for files/objects having a name matching the specification you enter.

To bring up the Find File window, you must have one of the file windows active, and then press [F19] (<Shift>[F7]).

Initial the field ‘Search’ is filled with the path of the active window. The file mask to search for is defaulted to ‘*.*’. You can change the path and the file mask.

Using the Find File window from the root of the IFS (‘/’) and search for all files (‘*.*’) will be very time and resource consuming. You should always consider to search the part of the IFS tree that makes sense. 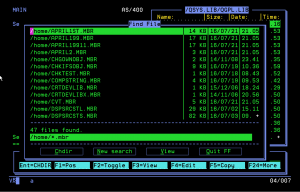 Move the cursor to the <Search> button by pressing <TAB> and then press [ENTER]. The search starts, and when the part of the IFS tree you have entered is searched, the result is displayed.

To leave the Find File window, either move the cursor to the button <Quit FF> and press [ENTER] or simply press [F12].

The File Mask only supports the use of asterisk and not question mark as Find File did. You can enter the mask in upper or lower case. FindFiles() is case insensitive. If you enter ‘*abc*.*’ the files ‘ABC.TXT’, ‘ABCDEFG.TXT’, ‘AbCdEfG.tXt’, ‘ZIGABC.TXT’ are found.